How to Lose Weight Without Trying

The weight-loss journey can be confusing. One day carbs are good and the next day they're bad. One day butter is your enemy, and the next it’s your best friend. It’s a never-ending road of twists and turns that seems to go on forever. Well ladies, we are here to make things more simple for you. Here are a few ways to lose weight without even trying.

Only Eat During a 12-hour PeriodYou’ve likely had sneaky suspicions that your late-night snacking was bad, but now science has proved it. In a new study from the Journal of Cell Metabolism, researchers found that mice who ate only during a 12-hour period, versus mice that ate whenever they wanted, were far more healthy and physically fit than the latter, even though they were eating the same amount of calories overall.

Eat Snacks With the Same Amount of Calories as Your Goal Weight"People mostly overeat their snacks,” says board-certified nutritionist and Food Coach NYC founder Dana James. "If you want to be 120 pounds, then your goal is to have two snacks a day that are no more than 120 calories each. That’s a really easy thing to do, which I tell my clients.”

Eat Carbs After Your WorkoutIf you’ve got a craving for pasta, your best bet is to eat it after you have exercised. “Your blood is moving, your heart is pumping and you’re still burning calories for at least an hour, so it’s the best time to indulge,” says BeFiT trainer Scott Herman. “Also, a lot of people don’t have goals or their goal is the end goal. It will keep you motivated to have small goals and to treat yourself for those goals, like finishing a workout and getting to eat a treat.”

Make Your Workouts More Effective Instead of spending an hour on a treadmill, make your workouts more effective. "When you’re on a treadmill, you’re working your endurance, but you’re not really breaking down any muscle tissue. It’s the breakdown and repair of muscle tissue that burns calories,” says Herman. “You can get an amazing workout in 10 to 15 minutes doing circuits that train your muscles,” he says. Learn about some of Herman’s calorie-burning circuits here.

These slimming foods will keep you full and happy.
READ ARTICLE 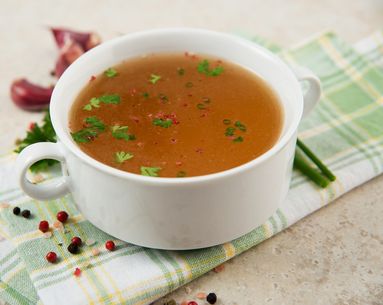 Diet + Exercise
Bone Broth for Beauty: Sip or Stay Away?

This could be the next big trend in drinkable solutions
READ ARTICLE
Diet + Exercise
Is Rebounding the Best Beauty Workout Ever?