Leslie Mann Dishes on Her 'Dramatic Comedy' Brain, Life With Judd Apatow and Why It’s Easier to Age in Hollywood When You’re 'In the Middle' 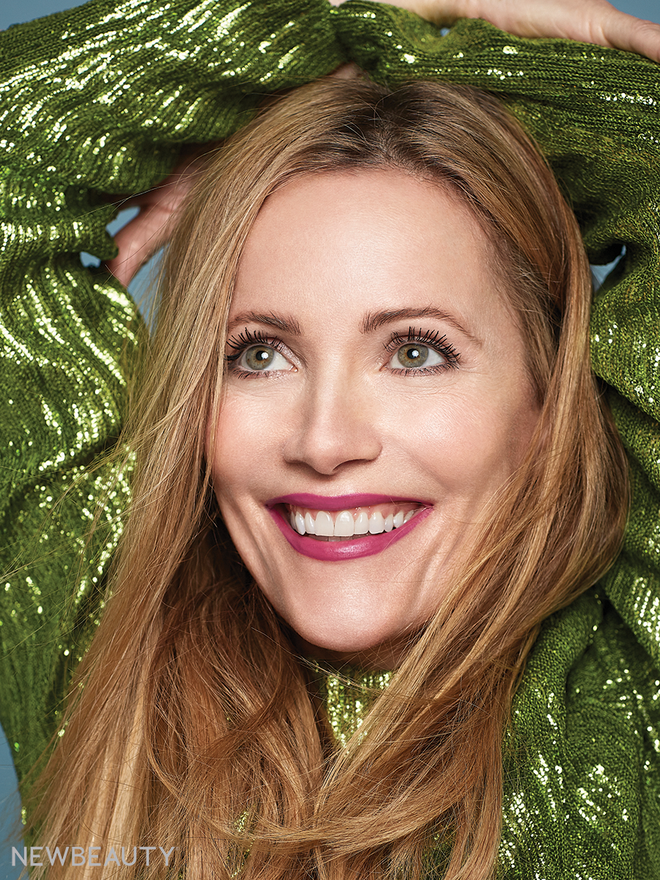 Leslie Mann wants to show me all the beauty products she uses. She doesn’t know the names, but she needs to text the photographic evidence that her bathroom is a fully stocked beauty hangar.

There are multiples of neatly lined Natura Bissé, Sisley Paris, Chantecaille and La Mer. Tatcha Camellia Cleansing Oil, Dr. Barbara Sturm Glow Drops and Patchology Eye Gels make an appearance; ReFa checks the box in the “fancy tool” category. A lab sample of Olaplex Daily Bond Smoother that looks like it was run over by a car comes next, while Chanel—both skin care and makeup—round out the lineup.

“This is good if you don’t want to put makeup on,” Mann texts in reference to Base Lumière as she follows up with a zoomed-in Rouge Allure Velvet La Precieuse #317 lipstick bottom. We’re nearing 10 separate shelfie shots, a nice round number that signals an assumption on my end that she’s almost done. She’s not.

“I’m sorry, I don’t know what that is,” I text back, thinking I may be about to discover some magical, crystal-infused potion.

This winter, Mann plays it a bit more straight in Robert Zemeckis’ Welcome to Marwen, a drama-fantasy hitting screens Friday that pairs her a third time with Steve Carell.

The two previously worked together in The 40-Year-Old Virgin, which her husband, Judd Apatow, co-wrote and directed; Carell even has a cameo in Knocked Up, which Apatow co-produced and daughters, Maude and Iris, appeared in—a family affair that she says the whole family considers “really special.” The daughters also appeared in This is 40 and Funny People (both of which Apatow wrote, co-produced and directed), and Maude works with Mann in the Jergens commercials. 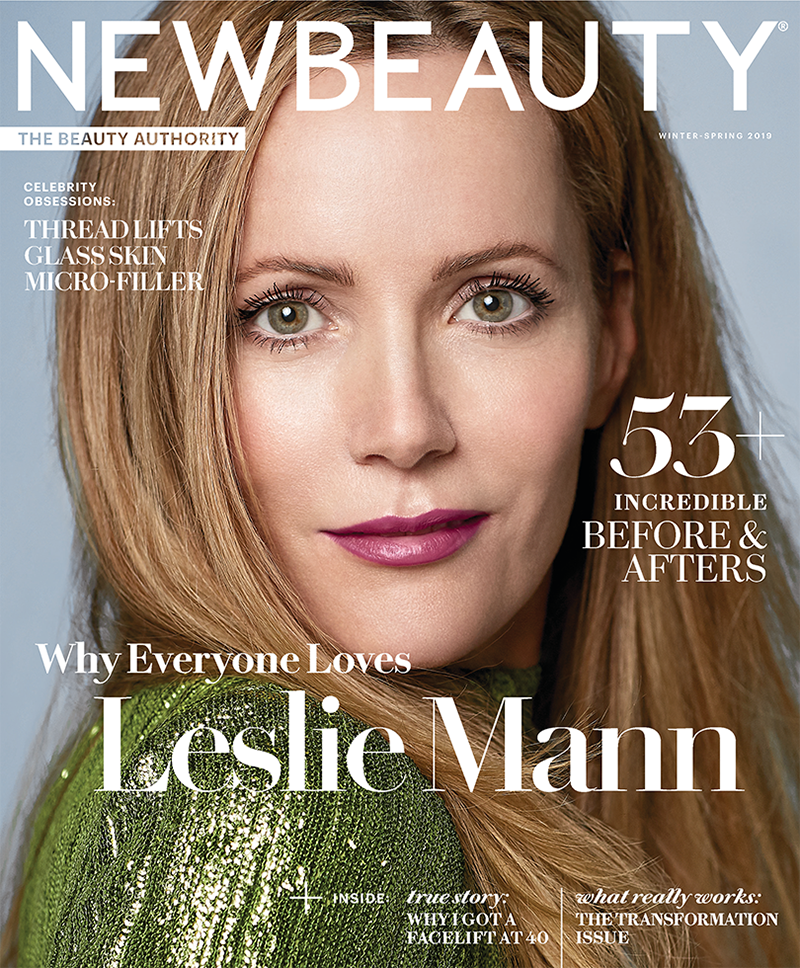 Your oldest daughter, Maude, is about to turn 21. That's a big one. Does it feel like a big milestone for you?
The biggest milestone for me was when she went away to college. I think I cried for four years before she went, and then the week that we brought her to Chicago to set up her dorm room and everything, I had no control over my tears and my sadness. It was just the saddest time ever. Then she came home a year and a half later. She also has a boyfriend who lives in London, so she’s been staying there a little bit, too. But she’s basically back! And that’s really nice. The 21 thing is definitely a big deal, but it’s not as massive as going away to college—at least not for me.

So it’s back to being three-to-one, women-to-men, in your house. Has Judd picked up a few things about your beauty routines?
He has, and he hasn’t. He is resistant to most things. He still dresses like a 14-year-old boy and refuses to stop. We were in Paris a few years ago and went into this empty restaurant, trying to get a bite to eat before the airport. We walk up, and the hostess looks Judd up and down, gives him a dirty look, and says “the restaurant is full” then turned and walked away. We can’t go places because of him—he is such a slob! For beauty stuff, he’s kind of open to buying something for blackheads, but then he never uses it. He doesn’t use any hair products or anything; he uses Irish Spring soap and then whatever leftover shampoo is in the shower. For a long time, he was using my purple shampoo for blonds and I don’t think he knew that it was toning his hair into a nice lavender hue!

You live in a house filled with funny people—are you funny in your everyday life, or is there something in particular that makes you serious?
Our lives are very busy. It feels really stressful sometimes, so it’s not all fun and games. We do make sure to carve out time to have lots of fun, too. Actually, I don’t know. Am I a serious person? I’m not quite sure who I am yet. I’m bad at answering questions like that, because it’s different every day. One day I might be super serious, and then the next week and a half, I’m not. I’m always changing. I think that’s good though.

Your role in Welcome to Marwen was kind of a change for you…
I love that movie. When I finally saw it finished, I was blown away. I love it and I am super happy to be a part of it. Robert Zemeckis is so creative. I want to live inside his brain.

Did it feel like a bit of a departure?
I feel like even when I’m doing comedies, I’m doing drama. I always feel like I’m taking it very seriously. In my heart, it’s always coming from a grounded, more dramatic place.

But comedy definitely seems to come easy for you. Was it always that way?
No. I remember when I was in acting class when I first moved to Los Angeles, there were a few times when people would start laughing at me for something I was doing. During auditions, it was the same thing. I would get the laughs when I wasn’t expecting to get the laughs. Then I just started heading down the comedy road, which led to my first job, The Cable Guy. Well, that wasn’t my first job, but it was one of them, and all of a sudden, I was surrounded by people I related to. I felt like I found my people, like-minded people, people who had a way of looking at the world similarly to how I look at it, and comedy people were really interesting to me. I got to be around Jim Carrey, Matthew Broderick, Ben Stiller, and Judd, and it was like a dream come true. Then that was that—that’s when I stayed in the comedy world. 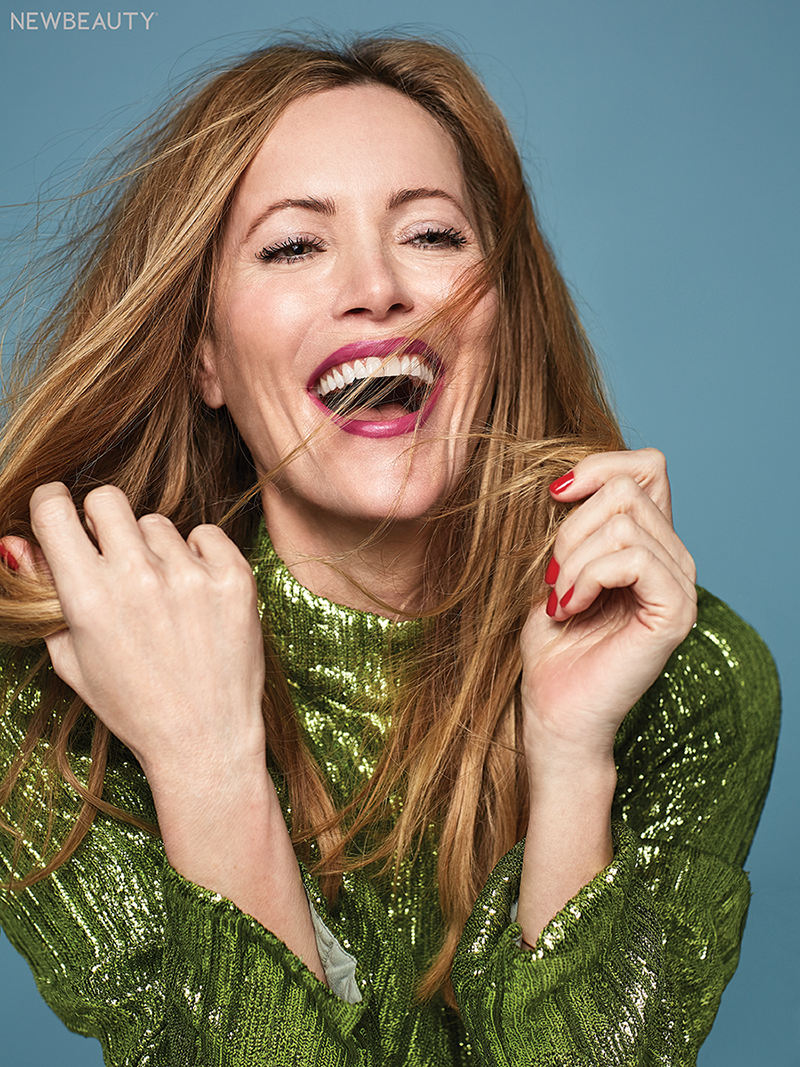 As much as you want…
Here’s the thing with me: I’ve never been the hot girl or the beauty person, so I don’t have that pressure that a ‘hot movie star person’ would have. My career has always been like, ‘Well, I’m not the hot person, I’m just a normal person, so it doesn’t matter.’ It’s not like, ‘Oh, she’s really falling apart! She was so hot when she was young,’ or ‘She was gorgeous when she was young and now she’s not.’ I’m just like, ‘I was fine then, and I’m fine now.’ That’s how I think about that, thank God.

But it has to be a little harder aging in Hollywood when compared to the average person.
Years ago, I wanted to be on the covers of magazines, but that was never my thing. I was more the person who worked and did the movies that I wanted to do, but I wasn’t a sensation like J.Lo. I think that served me in my life, because I didn’t have the fall—not that she’s had the fall either! And she never will! I love J.Lo! I’m just using that as an example. You know what I mean. I’ve just kind of been here the whole time. I’m just right here in the middle.

That doesn’t seem like a bad place.
It’s a great place! I can go out and do anything I want. I can go anywhere I want and I don’t really have an issue with lots of people coming up to me and needing to chat me up or do whatever. I’m just a normal person. I got really lucky—I still get to do the work I want to do, work with all of the people I want to work with, get paid well, and make a living, yet I don’t have those other worries, which is perfect for me.

Speaking of things being different, you posted your prom picture on Instagram—full ’90s hair and all—and got a ton of likes. You only follow a handful of people though and you rarely post.
I just can’t get myself to do it. I’ll think about it, and then I just talk myself out of doing it. Like, I always think, ‘I don’t need to do that.’ I probably should, or shouldn’t I?

When you posted that image it went semi-viral.
My prom picture? Really? I saw that guy, his name is Jeff Thomason, at our reunion recently and he’s still so good-looking! He’s even better-looking now! He’s married with kids and stuff, and so am I obviously, plus he’s not my type. But oh my God, my hair! I also used to get pixie cuts, which were worse than the perms. I did not look good with a pixie cut, and I would ask the hairstylist to leave the bangs so I would have that option. So I had a pixie cut with long bangs, but because I have really curly hair, it was frizzy. I had long, frizzy side bangs and then a pixie cut everywhere else. That was bad.

The quintessential “bad high-school hair story”…
I have more stories. I also used to overpluck my brows. That’s one thing I tell my kids. You can ask any one of them or their friends and they’ll all say, ‘Thank you so much for telling me not to pluck my brows.’ When I first moved to LA, I was friends with this girl who looked really cool. She was really into Madonna, and she had those Madonna-arched eyebrows. I think she even tattooed a mole or something. I don’t know, but she plucked my eyebrows to make them look like hers, but mine never grew back, so I have the thinnest eyebrows ever and that’s thanks to a woman named Sunshine.

Well, you’re doing something right. Your skin is glowing.
I have a lot of products! I’m accidentally burning my skin off while experimenting with all of these products. I’m also into lasers with no downtime.

You also know how to pull off a bold red lip…
I do! That’s Chanel! 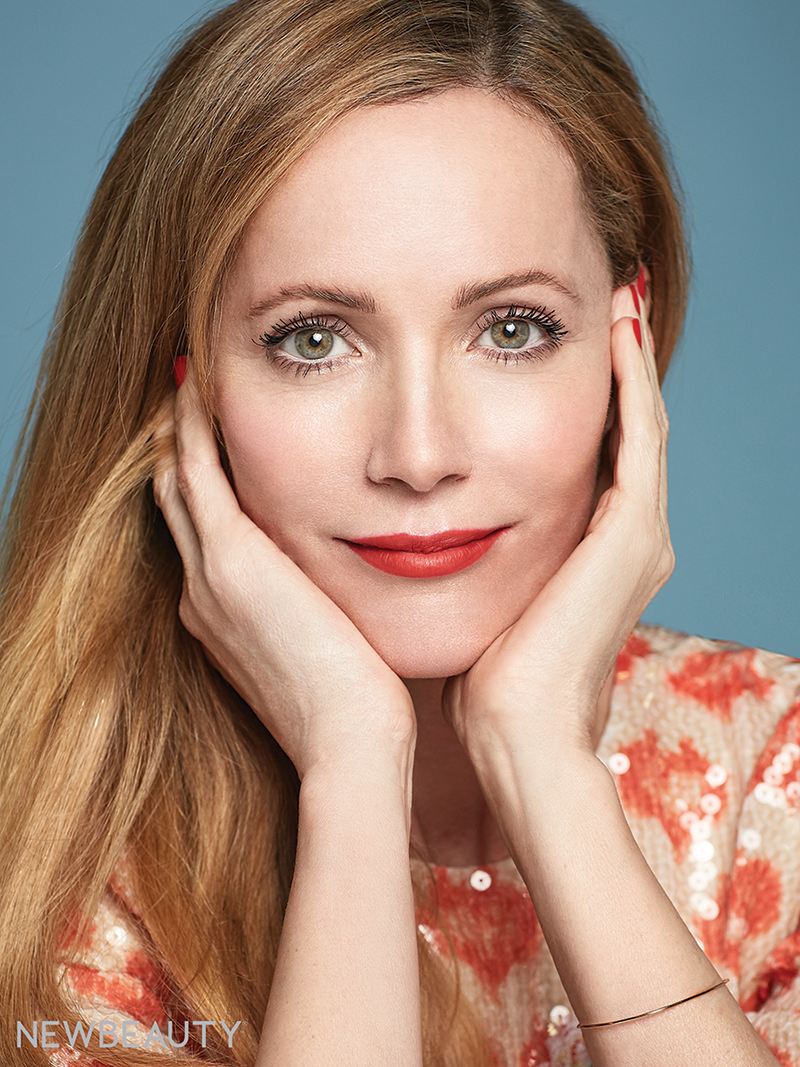 What else?
Well, I do meditate, and I feel like my life is so much better when I do. I try to do it every day, and when I don’t, I feel like I notice it—especially as I get older. I feel like I have less patience, and meditation grounds me. I like TM, but I also do guided meditation. I’m really into this guy, Glenn Harrold, who has this powerful accent. [laughs] This might sound weird to you, but his voice is so powerful, and he kind of yells, ‘Sleep, Sleep,’ or, ‘Relax, Relax.’ It forces you to submit, and you just find yourself 45 minutes later, waking up from him beating you into sleep, but I really like it. There’s also one for anxiety, which is really helpful.

But I do a lot of things. I try to exercise every day, I try to drink a lot of water and I’m really into all of those ‘goop things.’ I’ll do the detox diet, which is really good. I don’t even know what’s in it, but the food tastes really good, and after a few days, you notice your face isn’t as puffy as it was. You’re still using salt, oil and all of the good stuff, but then you suddenly start looking better. That’s what I do when I have to get ready for something.

That’s half the battle.
Yes! You just need to believe it.

What do you want to believe in in this New Year?
Peace! Peace in the world, peace in our hearts, peace in my heart. Peace! We need some f-ing peace.