Faith Hill on Family, Fame and Why Turning 50 Really Doesn’t Faze Her 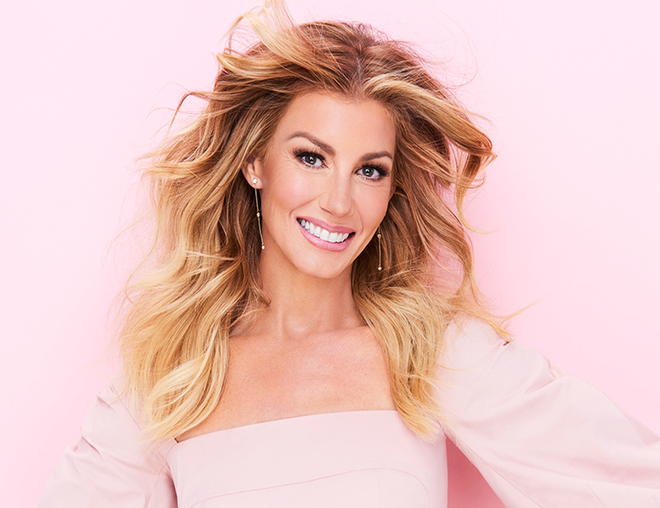 Imagine growing up under the same roof as not one, but two mega-superstar musicians. In some ways, you would assume the children of country music royalty to have a pretty unconventional upbringing.

But just like in every other household with teenagers, Gracie McGraw did some things right under her parents’ noses that they weren’t necessarily totally aware of while she was still living at home. Her biggest feat is so impressive it should go down in the high school hall of fame: forming a band in the basement.

You May Also Like: Behind the Cover: Faith Hill Reveals Her Best Beauty Tips

The difference between Gracie and every other teenager in the world starting their own band: Her parents are none other than country music icons Faith Hill and Tim McGraw.

“She taught herself to play the guitar. The band even booked some performances,” Faith says, quick to point out that all three of her teenage daughters, Gracie, Maggie and Audrey can sing. “They surprise us so much already. I can’t even guess who is going to do what.”

While she may not be able to predict the future, Faith admits it’s incredibly hard for her to give advice on a career that, besides being an integral force in her entire family’s life, has been a part of her DNA since she was seven years old and first hit the stage singing in Mississippi.

“Tim and I know what it takes to really do this for a living, but, as a parent, you don’t want to stand in the way of their dreams. It’s been one of the most difficult things for me as a mom—especially as a mom of all girls. You want to protect them; you want to make sure they aren’t disappointed. I’m certain all parents would say that about their kids, but there is a point you have to remember, ‘I was 19 once, and I remember the passion and the drive I had, and I just have to let them go and do it.’ Sometimes, it’s better to let your children go through things on their own and let them experience it instead of saying, ‘Don't do it this way, or you must do it this way.’”

One thing that is non-negotiable: Work ethic. “It is very important to us as a family, and the girls have seen that. The one thing we stress is that you don’t get things handed to you on a silver platter—you have to work for the things you want. They know it takes hard work. You don’t just arrive.”

On the Road Again

But arrived Faith has. Since her first album debuted in 1993, she has won five Grammy Awards, 12 Academy of Country Music Awards and four American Music Awards, among others. She also has the very impressive stat of selling more than 30 million albums worldwide, making her undeniably one of the most successful country artists of all time (not to mention, she’s held some not-so-minor side gigs as an actress, activist and producer, and rumor has it she’s executive producing a talk show). Next up: The 70-city, Soul2Soul The World Tour 2017, which starts in April and will reunite Faith and Tim back on stage.

“Our last tour was in 2007, so it’s been 10 years, which I cannot believe,” she says, adding that the actual touring isn’t the hard part—it’s the preparation, which she likens to the toughest workout ever, notched up 100 levels. “There’s so much preparation and it’s very intense because of the schedule. There’s lots of moving around, lots of flying in and out of cities on the same day, lots of being away from home, and no matter who you are, it takes a lot out of you. It really takes a toll. The show alone is so physically challenging because there’s a lot involved, and then you’re singing on top of it; I cannot imagine how it would be if I also danced. I want to stay healthy during the tour and the biggest part of that is what I do before the tour.”

While Faith says she can’t reveal too many details about what they have planned, she can share this: “Tim and I have done a couple of tours together like this, so we are very cognizant of the fact that our fans have seen us at different stages and we want to give them something completely different than what they’ve seen before. I can’t give up too much, but it’s going to be awesome and we are so excited.”

One of the biggest pluses of being on tour again: hitting the stage with her husband and longtime collaborator. Tim and Faith have made it a mission throughout their 20-year marriage to never be apart for more than three days in a row, and it’s clear to everyone who sees them together how solid their relationship is. (He even surprised her for our cover shoot, telling her throughout how great she looked and having her lean on his shoulder to help navigate the studio in her heels, as she was hesitant to walk in them because of a recent foot surgery.)

“We spoil Tim. He’s the only guy in the house, so the girls and I love to watch football with him and try to be the sons he never had. But he would not trade his girls for anything in the world. He loves all the attention.”

Like Faith, Tim has been in full-on prep mode for the tour during the last few months—with a little bit of being a beauty guinea pig on the side. “It’s very important to him to work out and stay strong and healthy. There have been times in his life when he didn't take care of himself at all, so focusing on being healthy is a big part of his life. I think we both realize how much harder it is as you get older. You just realize how important it is simply to exercise and get a good night’s sleep. It’s not that complicated, but somehow, it never seems that easy.”

Faith also says that their day-to-day life is rather low-key. “We are not the most exciting people in the world. We don’t stay out late and we don’t really go to parties—we are usually in bed by 9 p.m. For us, the rest just builds energy so we have the energy to do all the things we need to do.”

One task Tim needs his energy reserves for: standing in for some of Faith’s skin care testing. “He likes moisturizers because I’m so into moisturizer. Every time I try something new, I say, ‘Here, let me test it on you first.’ He has beautiful skin.”

When it comes to the subject of beauty, and aging in general (she’ll turn 50 this September), Faith says it’s something she tries not to give much thought to.

“I honestly don’t pay attention to it. If I did, my girls would notice and I don’t want that. It’s not a message I want them to have. The secret is being confident—with your age, with yourself. Life is so precious. We only have one; what’s the point of stressing about all of that?”

“Each decade has been different. Each day is a blessing. That’s how I want to look at it.”

One thing Faith does stress in the anti-aging game: having a realistic take on beauty, something she thinks is so important in this digital age.

“Social media can be so cruel, but we’ve always emphasized the importance of having a realistic take and a healthy view regarding beauty to our girls. They know it’s not just on the outside. It’s really important to us to teach them that beauty is on the inside. People can see your heart by the expressions on your face and by the way you carry yourself—they can see your happiness.”

Despite her beauty-is-on-the-inside approach to raising her daughters, they are just as beauty-obsessed as most other teenage girls. “It’s funny because all three of them are into makeup. Gracie can do great brows and perfect eyeliner. My girls have a better beauty regimen than I do. I don’t know where they get it from. I look like a clown when I do eyeliner!”

“I’ve tried so many trends that looked terrible! So many. Early in my career, I really had some bad ones. I did the high-school perm—why would I do that? I already have curly hair! And I used to wear tons of makeup, like that ’80s caked-on makeup. It’s the reason I rarely wear it now unless I absolutely have to.”

Which works out perfectly, because she says Tim’s favorite look on her is “just natural.”

“He likes when I have no makeup on and crazy-curly hair. Before I put it up in my ponytail, he always tells me to wear it down because it’s his favorite.” 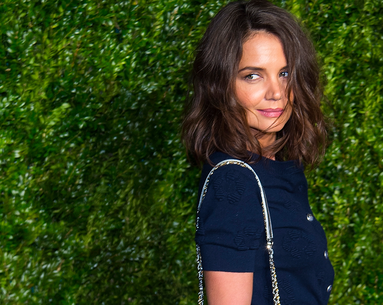 This one trend works on everyone! 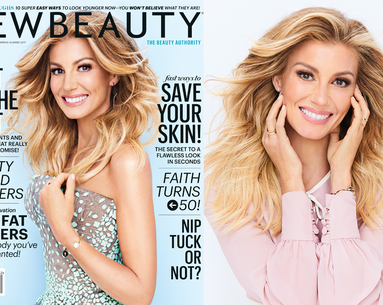