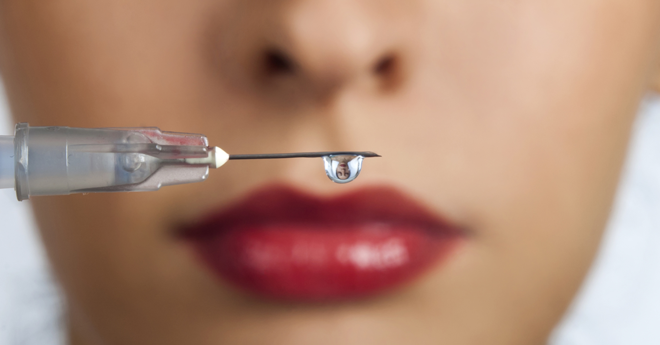 Beauty trends come and go and the same holds true in the world of cosmetic surgery. As New York dermatologist Dennis Gross, MD, explains, people get caught up in the hype of a new trend before knowing if the treatment provides results. The following aesthetic treatment are on longer in favor. If a doctor tries to sell you one of these, be wary—it may not be the real thing!

WHY IT FELL TO THE WAYSIDE: Collagen injections for the lips were big back in the 1990s and early 2000s. But, the effects lasted no longer than three months at most, allergy testing was required and the results weren’t reversible (hyaluronic acid used today is). In fact, the two largest manufacturers of collagen, Zyderm and Zyplast, don’t even make it anymore.

WHAT REPLACED IT: Today, doctors inject the lips with hyaluronic acid fillers like Restylane, which lasts longer, gives better-looking results and doesn’t require allergy testing. If a doctor tells you he or she is using collagen, chances are it’s not actually collagen and may not even be an FDA-approved or safe-to-use filler.

WHY IT FELL TO THE WAYSIDE: A quick facelift-like procedure that didn’t require large incisions or a long recovery time, the thread lift used permanent strings made of a suture material under the skin. “Anytime you use a permanent suture as a suspension technique it can cause problems,” says Chicago plastic surgeon Julius Few, MD. Patients were left with hard-to-treat lumps, knots, broken threads, asymmetries, a pulled-too-tight look and skin that didn’t stay lifted.

WHAT REPLACED IT: More standard facelift procedures (some which use shorter incision points) have replaced the thread lift, completely abolishing the use of barbed sutures for this type of facelift. Today, many plastic surgeons also address volume loss at the time of a facelift to produce a more natural appearance, which typically was not done with a thread lift.

3. Lipodissolve - “At the time, there was a big momentum with mesotherapy," says Dr. Gross. "It was highly promoted in the U.S. as ‘the’ way to get rid of fat.”

WHY IT FELL TO THE WAYSIDE: Popularized in France, mesotherapy has basically become extinct stateside. “Although some benefits may have been seen from mesotherapy, appropriate clinical research and protocols were not performed to develop a safe, reliable and consistent technique for fat reduction,” says Newport Beach, CA, plastic surgeon Dr. Sanjay Grover, MD. Practiced in doctors’ offices and medi-spas and by nonboardcertified practitioners, the post-treatment results that started to arise were both painful and disfiguring.

WHAT REPLACED IT: There has yet to be anything that works like mesotherapy, but patients have options when fighting fat and cellulite. Procedures like CoolSculpting, which freezes fat, radio frequency-based Vanquish and cellulitereducing Cellulaze and VelaShape III have all become popular and offer moderate results in the appropriate patient.