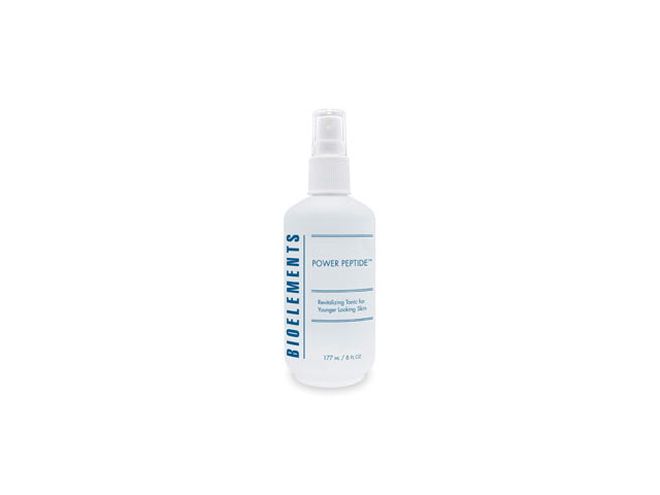 The debate amongst beauty experts rages on: To tone or not to tone? Many argue that you just don't need toner-that you can jump straight from cleanser to treatment. And perhaps that faction has a point. (Either that, or they hold a grudge against the cotton pad industry.) But what if the toner goes way beyond the actions of its less capable sisters? What if its list of faculties reads more like a serum than an astringent? What if it's so unlike other toners that the word toner isn't even in its title?

That's a lot of hype to live up to, but Bioelements' new Power Peptide does the job. We're supremely impressed with the amino-acid brawn in this super-spritz, especially the palmitoyl tripeptide, which is typically found in high-performance creams. It's teamed up with ergothioneine (found in mushrooms), licorice root and white tea; and together, they have an outstanding effect on skin dullness. Wrinkles and lines are smoothed, skin is brightened, and cellular activity is boosted down to the DNA.

That's enough to convert even the most toner-resistant beauty guru!

These Are the 15 Best Red Lipsticks of All Time, According to Celebrity Makeup Artists